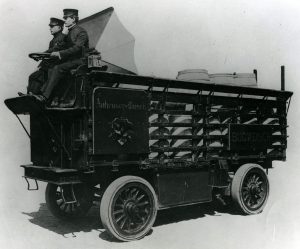 The first commercialized electric vehicle in the United States was developed in 1890 by William Morrison; the vehicle was a six-passenger wagon capable of reaching a speed of 14 mph. Electric vehicles had a number of advantages over their competitors — they didn’t have the vibration, smell, and noise associated with gasoline vehicles, nor did they require gear changes or manual effort to start.

The popularity of the electric vehicle began to decline by the 1920s. Electric vehicles were limited to urban use by their slow speed (15-20 mph) and low range (30-40 miles), and gasoline vehicles were now able to travel farther and faster due to improved road conditions and the worldwide discoveries of large petroleum reserves. Inventions such as the electric starter by Charles Kettering in 1912 and the muffler by Milton and Marshall Reeves in 1897 made gasoline vehicles even easier to operate. Finally, the initiation of mass production of gas-powered vehicles by Henry Ford brought the price down and made gas-powered vehicles even cheaper to purchase and maintain, further cementing the dominance of gas-powered vehicles in the market.

The energy crises of the 1970s and 1980s brought about renewed interest in electric vehicles, since they were not dependent on fuel. General Motors created the Electrovette in 1976 and the Impact in 1990. However, it wasn’t until the invention of the lithium-ion battery in 1991 that led to the development of modern electric vehicles capable of long-distance travel. By the late 1990s, it had been commercialized into pickup trucks. In 2017, the first light-duty commercial vehicle went into production.